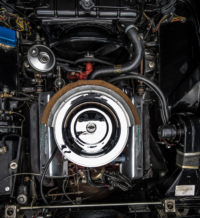 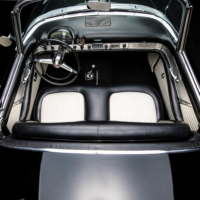 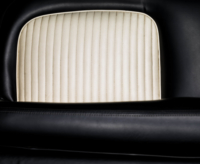 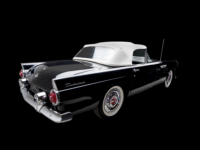 The Ford Thunderbird – short “T-Bird – began life in February 1953 in direct response to Chevrolet’s new sports car, the Corvette, which was publicly unveiled in prototype form just a month before. Under rapid development, the Thunderbird went from idea to prototype in about a year, being unveiled to the public at the Detroit Auto Show on February 20, 1954. It was a two-seat design available with a detachable glass-fibre hard top and a folding fabric top. Production of the Thunderbird began later on in 1954 on September 9th with the car beginning sales as a 1955 model on October 22nd, 1954. Though sharing some design characteristics with other Fords of the time, such as single, circular headlamps and tail lamps and modest tailfins, the Thunderbird was sleeker and more athletic in shape, and had features like a hood scoop and a 150 mph (240 km/h) speedometer hinting a higher performance nature that other Fords didn’t possess. Mechanically though, the Thunderbird could trace its roots to other mainstream Fords. The Thunderbird’s 102.0 inches (2,591 mm) wheelbase frame was mostly a shortened version of that used in other Fords while the car’s 292 cubic inch (4,8 liter) Y-block V8 came from Ford’s Mercury division.

Though inspired by, and positioned directly against, the Corvette, and European sports cars like the Jaguar XK 140, Ford billed the Thunderbird as a “personal car”, putting a greater emphasis on the car’s comfort and convenience features rather than its inherent sportiness.

The 1955 – 57 Ford Thunderbirds are among the most recognised iconic American cars. They have been put in television shows, movies and print advertisements, not to mention being pictured on a US postage stamp.

Our 1955 T-Bird has been restored by its previous owner in 2001. The car underwent a comprehensive “Frame-Off” full restoration to highest standards. The quality of the restoration has been rewarded with several concourse victories in the following years. The related show trophies will sell together with the car.

The restoration is still showing very well with some minor chips on the black acrylic enamel paint. The engine bay is crystal clear, still in show condition, like the complete interior.

The car is equipped with a white soft-top and an aftermarket fibreglass removable hardtop painted black to match the vehicle body colour.

We acquired the T-Bird in 2017 and imported the car to Austria. The Thunderbird was fully gone through in our mechanic shop, OK-Classic GmbH. Lights have been converted to Euro-specifications, carburator rebuilt, engine tuned up, all fluids changed and all gauges repaired, now working perfect (despite radio).

Our 1955 T-Bird is now being presented ready to show and cruise into the upcoming summer season.

Do not miss the chance to own an iconic piece of US automobile history. Still affordable, with prices increasing steadily!