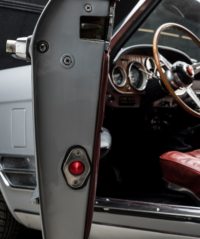 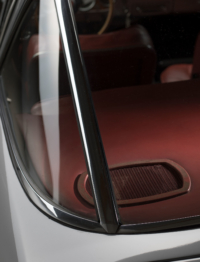 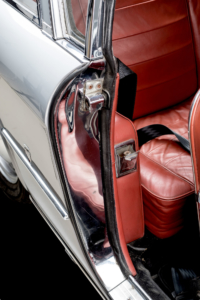 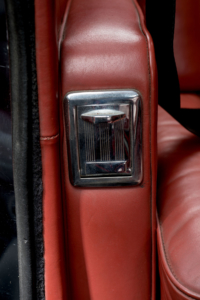 It’s not hard to see how the “Fiat 2300 Coupé” was the top-of-the-line Fiat in the early 1960s, what with its beautiful ”Ghia”-styled body providing the looks that in those days earned the big Italian coupes the fitting nickname, “Poor Man’s Ferrari.” These cars have since gone on to become very rare sought-after classics with steadily increasing value, rather being the “Rich Man´s Fiat” now.

Looking at the history of the “2300 Coupé”: It can be said that the concept model of the early Coupé was the crown jewel of Carozzeria Ghia’s stand at the 1960 Turin Motor Show and attracted so much attention that Fiat commissioned Ghia’s Sergio Sartorelli to refine the car for a production model, which would be based on the 2300 sedans. The big Fiat coupé debuted a year later in Geneva and joined the ”Pininfarina”-designed 4-door sedan and 5-door station wagon called “Familiare”.

By the end of 1961 the “2300 Coupé” went into production. Two options were available. The standard model “2300 Coupé” rated at 117hp and the “S” version. If you wanted to step up from the base “2300 Coupés”, the more powerful “2300 S Coupé” model was available. These cars were optimized by the legendary “Abarth” workshop before leaving Fiat’s factory. The 60´s were a golden decade for Carlo Abarth. His name became synonymous with speed and performance, and his masterpieces struck fear into his racetrack rivals across Europe.

Upon its launch, the “Fiat 2300 S Coupé” was among the fastest touring cars of the day. The six-cylinder engine of the 2300 models was designed by Aurelio Lampredi of previous Ferrari F1 engine fame. “Abarth” would then add finishing touches to the ”S models” motors. Thanks to an increased compression ratio, a more aggressive camshaft, two twin-choke Weber carburetors and several other upgrades the power increased from the standard model’s 117hp to 150hp. Besides the engine tuning, all “S models” were equipped with two-circuit 4-wheel disk brakes with power assistance.

The “Fiat 2300 S Coupé“ was a luxurious, sportive and comfortable 4-seated touring car almost without competition when presented to the public. Although priced in the range of the rivaling Mercedes “220 SE Coupé” and the 2-seated “230 SL” later on, the demand for the “2300 S Coupé” was tremendous. “Ghia” and “OSI” – both being in charge for bodywork of the Coupé were not able to fulfill the unexpected demand. Buyers had to accept 1 ½ years lead time prior to being able to drive their new touring car. Most buyers did not mind as they simply wanted to own one of those unique automobiles.

By the end of 1964 the “2300 Coupé” underwent a minor redesign. From that time onwards only the “S-version” was offered until the beginning of 1968. The “Series 2” named cars received additional chrome trim, a practical air inlet behind the front wheels, redesigned seats and interior and a wooden dashboard being decorated by the “Nardi” steering wheel.

About 3500 Fiat Coupés where built from 1961 to 1968. The exact production figure remains unknown as the Coupés where stamped in series together with limousines and station wagons. Approximately 200 Coupés are noted in the international Fiat 2300 register. It is believed that less than 300 examples are still in existence today.

André has been working in motorsport since he graduated in 1967 with an engineering degree. Mad about racing, he joined “Automobiles Alpine”, where he drove and designed racing cars. In 1967 he finished first in class at the 24 hours race of LeMans driving a Renault Alpine. He also experienced success in ”Formula Three” and ”Formula Two”, and designed a test chassis for “Renault’s” initial foray into “Formula One”. After “Alpine” was merged with “Renault-Gordini” to form ”Renault Sport” at the end of 1976 André was put in charge of development for the Alpine-Renault sportscar program. In 1978 one of the Cortanze’s designed cars won the “Le Mans 24 Hours”. In the early 1980s he moved across to become the first technical director of “Peugeot Talbot Sport”- under Jean Todt – and masterminded the company’s victories in rallying, rally raids and then sportscars – including two more ”Le Mans 24 Hours” victories for Peugeot. The multiple rally winning Peugeot 205 Turbo 16 designed by André remains iconic. In September 1993 André moved to “Sauber” to head the team’s F1 program. This lasted until the end of 1995 when he moved to the “Ligier” F1 team. A year in the politically complicated team – which ultimately became “Prost Grand Prix”- was enough and in January 1997 de Cortanze became technical director of “Team Toyota Europe” with the aim being to lead a third Le Mans 24 Hours assault followed by the creation of a Formula 1 team. He designed the Toyota LeMans race cars for 1998 and 1999 and was named Toyota Motorsport’s F1 project leader at the start of 2000, but left in May 2001. He moved on to become technical director of the Pescarolo sports car team. In 1978 de Cortanze designed a revolutionary 750cc motorcycle which had no orthodox frame. The engine became the frame, with both wheels and suspension being attached to it.

The “Fiat 2300 S Coupé“ remained in André’s possession until 2016. In 2012 he decided to have the Coupé restored by an Italian friend running a classic car workshop in Italy. The car underwent a comprehensive professional restoration, cosmetically and mechanically, before it was brought back to road.

We purchased the Coupé in 2016 from a French dealer. We are the second registered owners.

After a close inspection the front suspension, carburetors and ignition were serviced and rebuilt in our mechanic shop, “OK-Classic GmbH”.

When arriving in Austria, the old leather interior was showing some cracks. We decided to have the original leather restored, rather than having it replaced with new leather, ending up in “Barbie style”. With support from a professional leather restaurateur and manufacturer from Vienna we have been able to bring the original and aged interior back to new glory.

Finally the car is presented in an overall excellent condition, mechanically and cosmetically, with a charming patina on the beautifully restored 1960’s style interior.

The car has its original French title and registration document in André de Cortanze´s name and an Austrian classic car title.

A photo documentation of the restoration is available upon request and will sell with the car together with other car related documents including original documents from André de Cortanze.

The “Fiat 2300 S Coupé“ remains to be an outstanding touring car with luxurious and sportive appearance, just like it did in the 1960’s. Do not miss the opportunity to own one of the best examples.