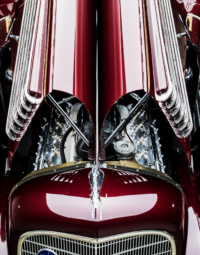 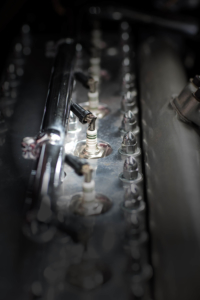 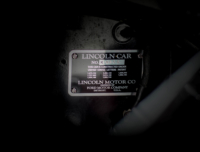 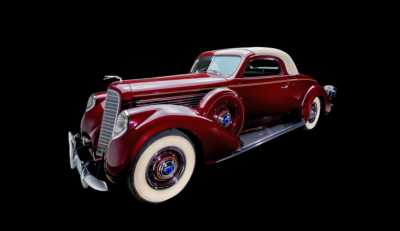 From 1931 through 1939, the K-series represented Lincoln´s flagship offering. The model K was an exclusive, luxurious fullsize car of the coachbuilt American motorcar era, available with several standard and custom body designs.

The model K was designed and built to compete in the luxury grade segment with car producers like Cadillac, Duesenberg, Marmon, Packard, Peerless, Stutz and a few others.

Of the major competitors from 1931 only Cadillac managed to survive the decade. The other American luxury car manufacturer went bankrupt or had to shut down production as a result of the Great Depression following the “Black Tuesday” stock market crash in 1929.

From 1934 onwards the Lincoln series K was equipped with a new 414-cubic inch V12 engine, which remained the basis for all models K through 1939. The biggest improvements to the engine came in 1936 with the upgrade to hydraulic lifters and a revised cam which lead to much smoother and silent operation. The model K body was reworked in 1936 with integrated headlights and a more streamlined appearance.

That included the 2-passenger Coupé by LeBaron of which just four have been built in 1939.

Our exceptional example is one of three known to exist today. Its serial number is K9656 and it still holds the original numbers matching engine.

The exterior is finished in maroon with a small gold coachline, combined with luxurious tan mohair interior.

There are two trunks, one under the rear deck with access from the side for occasional baggage or golf bags. The exterior has dual enclosed side mounts, wide whitewall tires, hubcaps and trim rings. The interior is trimmed with wood including highly polished surrounds for the side windows.

As the car has been sitting for decades and the engine and most of the mechanics haven´t been touched during the restoration in 2009-2012, we decided to get our Lincoln fully sorted.

From 2013 to 2015 all mechanics underwent a professional rebuilt including a complete engine overhaul with new bearings, pistons, heads, etc. No part remained untouched to ensure to bring K9656 back to its old glory and make it an excellent car overall.

In 2015 we brought Lincoln K9656 back to the road. Now it is representing a really outstanding example of a super-rare American luxury prewar car.

We took the car out for some car shows and attended a few classic car rallyes, including the famous Austrian Ennstal-Classic in 2015. Appr. 2000 miles have been added to the odometer after the mechanical restoration without any issues.

An outstanding car – great to show and a pleasure to drive!